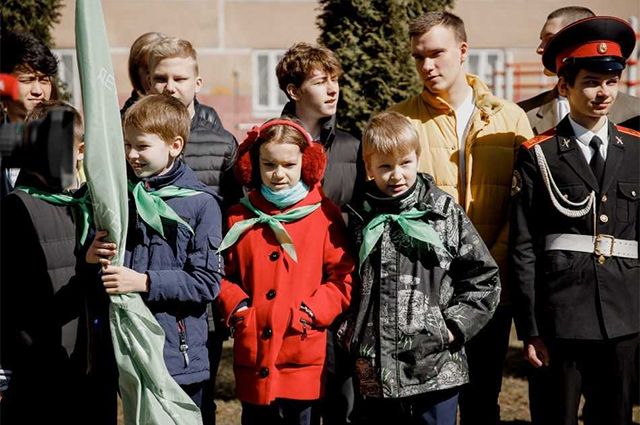 As part of the action “Garden of Memory” planted the 5 millionth tree. This anniversary oak was planted on the day of the 80th anniversary of the end of the battle for Moscow in the Tula region. He will grow up in Yasnaya Polyana. Also, commemorative trees were planted by students and teachers of the school named after Hero of the Soviet Union Lazar Papernik to commemorate the round date.

At Yasnaya Polyana in memory of the participants in one of the greatest battles of the Second World War, trees were planted by local residents, volunteers and employees of the museum-estate. Now there are 150 oak trees here.

“During the Great Patriotic War, Yasnaya Polyana faced many trials: enemy occupation and the struggle to preserve memorial items, the evacuation of exhibits to Siberia, and the restoration of the estate. We are glad that the museum has joined such an important campaign that truly unites people and helps to preserve historical memory. It's nice to know that a considerable part of the work has already been done within the framework of this project: today the five millionth tree was planted in the estate of Leo Tolstoy”, — said Ekaterina Tolstaya, director of the state memorial and natural reserve “Museum-estate of L. N Tolstoy “Yasnaya Polyana”.

Memorial trees were also planted in the capital of Russia. Pupils and teachers of school No. 2090 laid out their garden in honor of the Hero of the Soviet Union Lazar Papernik, whose name the school bears.

Papernik, as part of a group of skiers on the night of January 23, 1942, while performing a combat mission behind enemy lines, was surrounded in the village of Khludnevo. The heroic battle lasted until the morning, but the forces were unequal. Left alone, Papernik blew himself up and the enemies surrounding him with a grenade. This is one of the heroic episodes of the battle for Moscow.

“We must not forget the heroes of the Great Patriotic War. Now many are trying to trample on their memory, destroying monuments in other countries, in Poland and Ukraine. This is very sad, since their ancestors also gave their lives for our existence. Let's be worthy of the history of our country, which liberated all of Europe from fascism. Unfortunately, these sprouts sprouted in neighboring states. After 80 years, we again have to fulfill this mission, — said Elena Popova,principal No. 2090 >.

“Of course, we remember the heroes of the Great Patriotic War, but today there is also a place for heroism. Now is the time that every morning you start by watching the news from the front. Everyone should know the history of their family: who fought on which front. It is necessary to study history, otherwise you can lose the country, as happened with Ukraine”, — said Nikolai Chuikov, representative of the Victory Generals Memorial Foundation, grandson of twice Hero of the Soviet Union, Marshal of the Soviet Union Vasily Chuikov.

Irina Losik also noted the importance of preserving historical memory. Everyone should know the history of their country and its geography — this will allow him to better understand his homeland.

«I think that thanks to such actions, children are immersed in history, they develop patriotic feelings. In addition, it is also an environmental action. I hope that the trees planted today will delight schoolchildren and teachers. They will serve as a reminder of this good tradition”, — said Irina Losik, granddaughter of the Hero of the Soviet Union, Marshal Oleg Losik.

Also, landings within the Garden of Memory on the day of the 80th anniversary of the battle for Moscow, they also defeated the Borodino forestry of the Moscow region. 15 trees in honor of the heroes appeared here.

“Park of Memory” in Troparevo during the war it was used as a parking lot for Soviet soldiers — the 125th separate road-building battalion was located here, which built a bridge across the river. The territory was restored last year.

«The Moscow Region is participating in the Garden of Memory campaign for the third time. April 20 this year — significant date — 80th anniversary of the Battle of Moscow. Remember, honor the defenders of the Motherland and tell the younger generation the truth about the Great Patriotic War — our duty», — said Georgy Filimonov, Deputy Chairman of the Government of the Moscow Region.

For the first time, the action “Garden of Memory” passed in 2020. Its main goal — to perpetuate the memory of all those who died during the Great Patriotic War. In total, this is 27 million trees according to the number of dead heroes. The action takes place on behalf of the President of the Russian Federation Vladimir Putin, who planted a tree of memory at the Rzhev Memorial. Over the first two years, more than 2 million people from all 85 regions of Russia and more than 50 countries of near and far abroad joined the action.