The annual final meetings of the Collegium of the Russian military department with the participation of the Supreme Commander-in-Chief are not ordinary events. But this year, special attention was riveted to the collection of the highest command personnel. The reason is the “last warning to the West” announced the other day by the Russian Foreign Ministry. The diplomats made it clear: if you don't want to talk to Lavrov, you will talk to Shoigu. And this is no longer a joke. 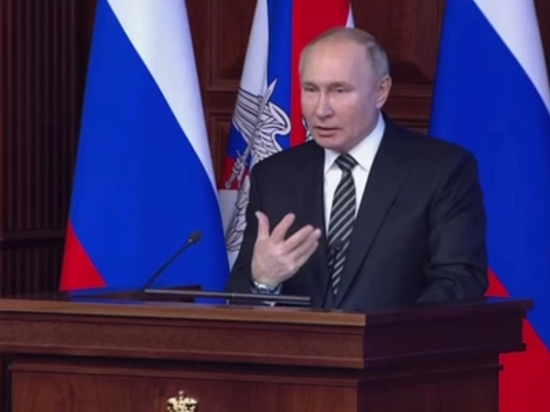 Everybody noticed the change in the tone of our communication with the West. Previously, they were limited to appeals & nbsp; like & nbsp; “ let's live together. '' Now marked with 'red lines'.

Why now? They do whatever they want on our western borders. For example, they use the airspace of Ukraine for training flights of American bombers carrying nuclear weapons. Reconnaissance planes are ironing the sky near our borders. As Shoigu said at a meeting of the Board, the number of such flights has doubled. NATO warships arrange provocations in the Black Sea.

Imagine, for example, that our bombers, taking off, for example, from Cuba or Venezuela, make targeted training flights towards Florida or New York. Why not?

New threat to Russia's security & mdash; the possibility of deploying US strike weapons in Ukraine, the territory of which is being actively developed by NATO. In this case, as Putin said, the flight time of American missiles aimed at Moscow could be reduced to 5-10 minutes.

President Putin outlined priority tasks for the Collegium members. One of them & mdash; further rearmament of the army and navy. It is also associated with the task of mastering new weapons and new methods of warfare. Elements of the new tactics will be tested in the Vostok-2022 strategic exercise.

Putin demanded that the generals pay attention to such an aspect of military practice as accuracy and speed of decision-making. He instructed to develop decision support systems at all levels, introduce artificial intelligence technologies.

Commanders, he said, are required to be able to make non-standard decisions in a combat situation. The Commander-in-Chief instructed the commanders to look closely at the talented young commanders, to ensure their career growth.

In turn, Defense Minister Sergei Shoigu reported to the President on the results of the development of the Russian army in 2021 and on the tasks for 2022. The tasks are in line with the complex international environment.

So, what military moves by the US and NATO are of greatest concern to the Russian military? Shoigu singled out the following. First, the United States is building up its forward military presence at Russian borders. In Eastern Europe, a group of eight thousand troops has been created, which are periodically replaced. & Nbsp;

After the United States blew up the Intermediate-Range Nuclear Forces Treaty, there was a threat of the appearance of such missiles in Europe, as it was in the 70s. Reconstruction of the command of fire destruction partly confirms such plans. Until 1991, it was responsible for the use of medium-range missiles.

A US brigade armed with strike weapons was registered in Europe.

In Poland and Romania, the positions of the US missile defense system can be used to launch cruise and ballistic missiles in our direction.

The United States and NATO are conducting exercises on the transfer of troops from the United States. NATO members are actively involving non-aligned countries that were once part of the USSR in their war games & mdash; Ukraine, Georgia, Moldova.

Ukraine is supplied with weapons, which can provoke Kiev to military action in the Donbass. The territory of Ukraine is being developed by private American military companies. With their help, Washington solves dirty deeds around the world & mdash; from Africa to the Pacific Ocean. As Shoigu said, 120 fighters of American PMCs were seen in the conflict zone in Donbass. And not just like that, but also with some kind of chemical weapon. It is not otherwise that they are preparing a provocation in order to blame the unrecognized republics for everything. The tactics of the United States and Great Britain have been well worked out in Syria.

All these unfriendly steps, Shoigu said, force the Russian military to “ closely monitor the situation and promptly respond to all threats to military security. ''

The combat capabilities of the Armed Forces are increasing from year to year. The first missile regiment was re-equipped to the Avangard hypersonic complex. The Navy has replenished another nuclear-powered submarine of the Borey-A project, armed with & nbsp; missiles “ Bulava ''.

The Ground Forces have not been forgotten either: two new divisions have been deployed & ndash; motorized rifle and tank, as well as missile and anti-aircraft missile brigades. In the Aerospace Forces, an aviation and anti-aircraft missile regiment has been formed. A separate air regiment, armed with MiG-31 aircraft with the Dagger hypersonic missile, has been commissioned.

A sea-based Zircon hypersonic cruise missile is on its way. Serial deliveries will begin next year, Shoigu said.

In terms of the military budget, we are 15 times ahead of the United States and 5 times & mdash; China. In addition, countries such as Great Britain, France, Japan are ahead of us in terms of military spending.

Shoigu outlined the prospects for further rearmament of the army. By 2026, the number of long-range high-precision weapons carriers will increase by a third, and the number of air, sea and land-based cruise missiles – & ndash; 2 times.

Assessing the readiness of troops and naval forces to carry out missions as intended, Shoigu especially noted the ability of armies and brigades to regroup over a distance of over 3.5 thousand km. Well, that is, if necessary, the “ Siberian divisions '' will be in the right place on the European territory of the country in a matter of hours. And this is good, considering that in August 2008, as the generals later said, the group of troops was barely assembled to force Georgia to peace.

He named Shoigu and the priority tasks of the Armed Forces for 2022. The numbers are impressive. Thus, the Strategic Missile Forces will receive 21 launchers with intercontinental ballistic missiles Yars, Avangard. and 'Sarmat'. The Aerospace Forces will replenish 2 strategic missile carriers Tu-160M.

The Aerospace Forces and naval aviation will receive 257 more new and modernized aircraft and helicopters in 2022. It is a lot or a little. For comparison, all the Ukrainian Air Force & mdash; about 100 old Soviet aircraft Su-27, Su-24, Su-25 and MiG-29.

In addition, the Russian Aerospace Forces will receive 5 divisions of the S-400 Triumph anti-aircraft missile system.

The Russian Navy will include a nuclear-powered submarine of the Borey-A project Generalissimo Suvorov, as well as 5 submarines, 11 surface ships, 3 combat boats, 2 coastal missile systems.

In a word, as Shoigu reported to the Supreme Commander, “next year the course will continue development of the Armed Forces and increasing their combat capabilities. ''