In Kyiv, the defeat was passed off as yet another “victory”

The details of the surrender of a thousand Ukrainian marines in Mariupol are becoming known. The process of receiving prisoners began late at night, lasted several hours and ended by morning. It couldn't be done any faster, because everything happened in a war zone, with precautions. 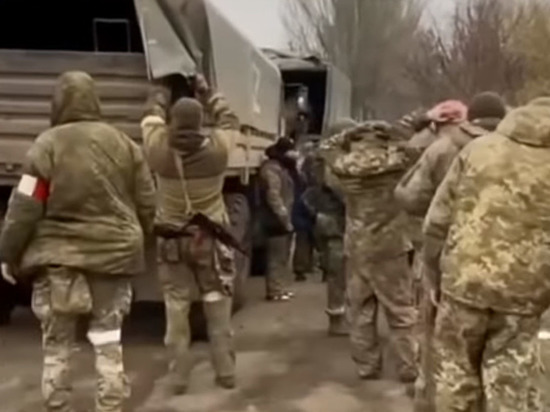 Photo: Frame from video < p> TV journalist Alexander Sladkov was the first to report the important event at night in his Telegram channel. He, along with employees of the Ministry of State Security of the Donetsk People's Republic, was present at the exit of the first batch of military personnel of the Armed Forces of Ukraine (APU).

By morning, the Russian Ministry of Defense of the Russian Federation confirmed the information and provided updated data: 1,026 Ukrainian servicemen of the 36th Marine Brigade, including 162 officers, and 47 women servicemen of the Armed Forces of Ukraine, left the territory of the Ilyich Metallurgical Plant without weapons. Age – from 20 to 55 years.

Out of a thousand marines, 151 were wounded. They were provided with primary medical care and sent to the Mariupol hospital. Humanly. Not at all the way Ukrainian militants treat our prisoners. The video, where sadists from the Armed Forces of Ukraine and the National Battalions crack down on our unarmed military, by the way, is shown to Ukrainian prisoners. For edification.

The capture of thousands of military personnel of the Armed Forces of Ukraine at once is, of course, a significant military success. The day before, 267 Marines laid down their arms and surrendered in Mariupol. And it was not the first party. So far, the total number of Ukrainian soldiers who have surrendered has not been disclosed. They say that the bill goes to many thousands.

By the way, in Kyiv they hastened to pass off a serious defeat as a “overcome”. It turned out funny. According to Aleksey Arestovich, adviser to the head of the presidential office, “the 36th brigade avoided defeat in parts and received additional serious opportunities, in fact, gained a second chance.”

The servicemen of the Armed Forces of Ukraine in the same Donbass group near Slavyansk and Kramatorsk have a reason think about it: maybe it’s also better to “get a second chance” and lay down your arms than to die?

One of the Marines who surrendered said that a few days ago, when there were another 1,500 people in the brigade, some offered to lay down their arms due to a stalemate. But the initiators were shot. It turns out that in a few days the losses amounted to five thousand people. But their lives could have been saved.

A well-known expression: defeat is always an orphan, and victory has a hundred fathers. Whose merit in the case of the surrendered Marines? The commander of the Vostok battalion of the Ministry of Internal Affairs, Alexander Khodakovsky, believes that the mass surrender of the enemy, who held the vast territory of the Ilyich plant, is a common victory. The forces of the DPR, the Russian marines, and the aviation of the Russian Aerospace Forces, which ironed the fortifications, also contributed to it.

“The enemy cannot break out, he is pinned down, and the units pour fuel on the fire, which break into the industrial zone and push him to the center, where bombs and shells regularly arrive,” Khodakovsky described what was happening. – … So that the enemy finds himself in a hopeless and unbearable situation, when it is already simply impossible to hold on, and either death or captivity remains – with all available forces, and most of all, difficult military work is carried out by ordinary infantry Vanya of various departmental affiliations.

As military reporters present at the procedure for receiving prisoners explain, each of them is interrogated, his identity is established, participation in the war against the population of Donbass since 2014. The task of the security agencies is to identify those who are involved in nationalist formations banned in the Russian Federation, in war crimes, in the killing of civilians, and in shelling. It is said that most of those who surrender blame their commanders for leaving their subordinates to their fate.

What happens to the prisoners then? After the meeting with military investigators and until the end of the operation, most of them will be under guard on the territory of the DPR and LPR. Those who committed crimes will face trial.

Some may be listed for exchange for our prisoners of war. But there are few willing Ukrainians: according to Zelensky’s decrees, the country is mobilized and all men from 18 to 60 years old are put into service and sent to fight. There are few people who want to go back to the front.

The People's Militia of the DPR and LPR posts a lot of videos on the networks with the interrogation of prisoners. One of them is Vladislav Poprotsky, born in 1979. His unit was transferred from the Lviv region near Severodonetsk. The commander, who promised to shoot anyone for leaving their positions, fled first, leaving the fighters without communication under fire. A propaganda leaflet with a call to surrender fell into the hands of a soldier, and a 40-year-old soldier went out with it to ours. “There is no point in fighting against your own people, it is better to be at home,” the APU soldier says now. – I am for the fact that there is no war.

It would be good, of course, if such thoughts would quickly reach the consciousness of as many soldiers of the Armed Forces of Ukraine as possible. Ramzan Kadyrov, commenting on the mass surrender of marines, wrote on his Telegram channel, addressing those who hold the territory of the Azovstal plant adjacent to the plant named after Ilyich: “I appeal to those who are still holed up in the basements and tunnels of the plant: you know that we treat prisoners like human beings. Come out! Think about your own and other people's families, as more than a thousand marines did today.”

The writer Zakhar Prilepin put it even more clearly: “Everyone who is today in Kharkov, Odessa, Nikolaev and recent events, to understand: the Russians will take any city anyway; in the final, the survivors will still have to give up. All this can be done without waiting for the final, saving cities and townspeople.