Sniper reconnaissance is, perhaps, the most secretive military profession. Usually these people shy away from communicating with journalists and do not talk about the specifics of their activities. However, I still managed to talk with a member of the international brigade “Pyatnashka”, who agreed to slightly lift the veil of secrets.

Photo: From the personal archive

“Khan” became interested in sniper business back in his cadet days, when he studied at one of the Ukrainian military universities. Future officers were very often taken to the range for fire training classes. There, the young man began to learn how to shoot from the SVD – the Dragunov sniper rifle.

– I remember the first time I tried to shoot, and immediately hit a matchbox from 500 meters, – says the sniper. – Then, probably, I realized that it was mine.

However, the military specialty of “Khan” in the Ukrainian army was far from being a sniper and did not imply the development of the skills necessary for him. Until 2014, the man did not particularly practice shooting. The situation changed when “Khan” stood up for Donbass.

– Snipers were very needed then, – the interlocutor admits. – There were not so many people who knew how to properly handle weapons.

It was then that “Khan” met a volunteer from Chechnya, who became his mentor and taught in practice everything that a real professional should be able to do. I had to master the theory on my own, in my own time, the serviceman shares.

– The main requirement is a certain psychotype. Only melancholic and phlegmatic people are suitable for snipers, people who are always calm. Fidget with hot blood is not realistic to train.

The second important point is vision. The eye must be developed one hundred percent. Instruments and optics are, of course, good, but shooting from a rifle is not the main task. The main thing is disguise. When you're camouflaged properly, you can get very close to the enemy. After all, not all modern rifles work at long distances.

Camouflage, according to the sniper, is also important for personal safety. It is necessary to become absolutely invisible to the enemy, to be able to merge with nature or become invisible in urban areas. This is the foundation of the basics.

About the specifics of the work “Khan” says so. Snipers mostly work in pairs, in professional slang – “deuces”. This is necessary so that, firstly, there is interchangeability, and secondly, when the first number is concentrated on work, the second gives him all the goals, instructions and amendments.

– Since using walkie-talkies and others communication devices during the execution of the task is strictly prohibited, then communication between snipers is maintained in the literal sense of the word on the fingers, with gestures. There are symbols – for example, “stop” or “work”. “Deuce” works in the zone of visibility of each other.

– First of all, psychological preparation is important, because disguise is not only about putting on a camouflage coat, covering all visible parts of the body and smearing your face. You need to have iron endurance and patience to wait for hours, if not days. To be honest, sometimes you have to relieve yourself. True, this happened to me once, when I had to wait for the enemy for two days in Starobeshevo. We are the same people, and you can’t get away from physiological needs anywhere. Unfortunately, even among the military, not everyone understands this, they try to get up from the “lying bed” in order to go to relieve themselves. Thus, they unmask themselves, frustrate the task and expose themselves… 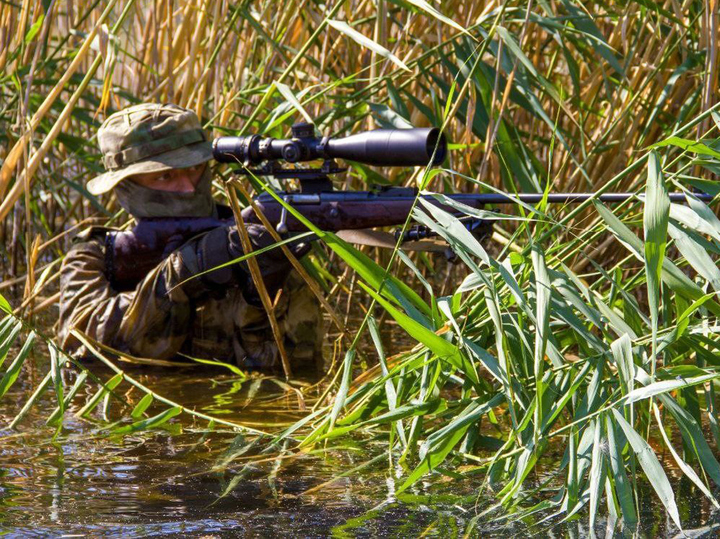 “Khan” said that special camouflage coats were developed for camouflage, taking into account the time of year and the terrain, but he personally is in favor of the sniper “adapting” the camouflage suit himself.

– You yourself know in what terrain conditions I have to work, – the officer explains. – For example, if there is a forest, then it is important what kind it is: with clearings, coniferous, deciduous, gray, brown … Therefore, we make camouflage suits for each task ourselves. We took the base, and then we sew on the ribbons of the desired color.

According to the interlocutor, snipers, as a rule, take “short and thin”, but at the same time physically strong guys. The distances that sometimes have to be overcome to the target require endurance.

– In addition to just walking, – Khan explains, – you also have to carry a weapon and a backpack with everything you need.

It turns out that the sniper's backpack is completed in “three echelons”. Ammunition is stacked at the very bottom, with which they work directly at the target and a food set to eat on the spot. The second layer is portable ammunition, which is used during the journey, and dry rations. And at the very top – ammunition that you may need “right now”, as well as camouflage.

– You should not take a lot. And most importantly – do not eat a lot before going on a mission, – the officer clarifies. – Firstly, it's hard to walk, and secondly, to want to relieve yourself as little as possible.

However, as the interlocutor continues, no matter how professional you are and no matter how well you prepare, fear is always present. And that's more of a plus. Since at such moments the instinct of self-preservation works at its maximum. And for a real specialist, it is important not only to complete the task, but also to return alive and unharmed.

– It's scary to be captured, it's scary to just die and wallow to rot in the landing. All emotions, like everyone else's…

Khan also told about how he joined the ranks of the People's Militia of the Donetsk People's Republic. After graduating from a military university, he served two terms under the contract. Then in the “zero” his regiment was reorganized into an airmobile brigade of the Armed Forces of Ukraine.

They took him out of the state, promised to attach him to the service, but the situation did not change. Then he decided to move to the capital and got a job as an ordinary master of finishing works. After all, I had to earn money somehow.

– During the events on the Maidan, I became interested in what was happening there, and I decided to take a walk and see. On Bankova Street, one of the Berkut fighters called me, at first I tensed up, thinking: “Well, that's it, I hit it.” And then it turned out that this is my former colleague, in a balaclava you can’t see his face.

In February, two days before the start of shooting on the Maidan, the same “Berkut” soldier called and offered to go to the Crimea, sign up for the militia. The man agreed.

– Four days we were in Belbek, at the airport. And then I saw on the Internet that the 25th Airmobile Brigade of the Armed Forces of Ukraine was starting to crush checkpoints in Slovyansk, and something in my heart skipped a beat at that moment. 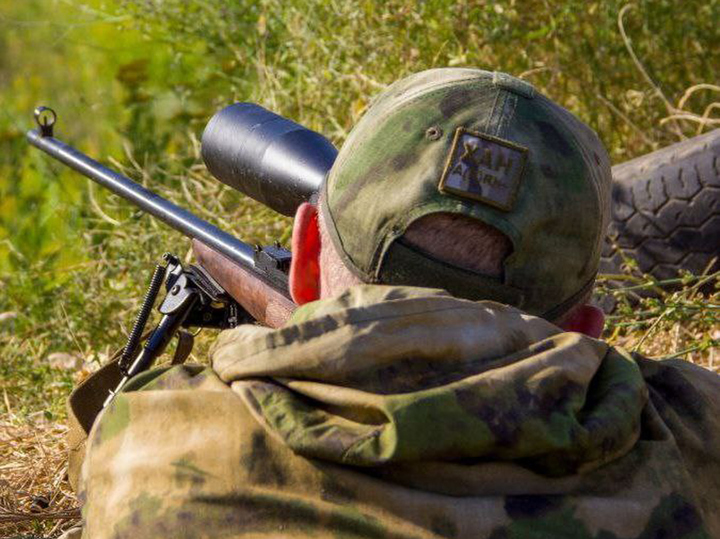 This video became life-changing for the soldier. Straight from the Crimea, he went to Slavyansk and volunteered for the Lynx unit. During the hostilities, he received a concussion and was sent for treatment to Donetsk. After recovery, he got back into action.

– It was then that I first tried myself not as an ordinary fighter, but as a sniper, – continues “Khan”. “Now it’s already strange for me to recall those feelings, but then for about five seconds I couldn’t force myself to shoot. And when I fired, I almost immediately started vomiting, and the mentor insisted on removing me from work.

After the cover group escorted the snipers to the base, “Khan” had to use the help of a psychologist. In fact, this, he told me, happens to almost all novice snipers.

– Machine gunners, tankers, they just see a big target and shoot. And the sniper sees a specific person, and it is psychologically more difficult to shoot him, – the officer continues. “But we saw what Ukrainian soldiers did to civilians, how they shelled cities. All this deprives you of pity for the enemy. Here you need to catch a fine line, so as not to feel hatred for him, but to remain calm. Because when you get angry, your blood pressure rises, your hands begin to tremble, and you can no longer smoothly pull the trigger.

Khan's service lasted until 2020. By that time, he was already not only a high-class sniper professional, but also successfully trained other fighters. The wound received during the performance of a combat mission near Novoazovsk forced Khan to interrupt his military career for a while.

– On that day, we almost came close to the dugouts, and my first number ran into an OZM-72 mine. He died on the spot, and I was badly cut with shrapnel…

For almost a year, the serviceman was recovering, but a number of subsequent events did not allow him to recover to the end. An unexpectedly received offer to serve in the international brigade “Pyatnashka” returned “Khan” to service.