“Tandem with Harris is a completely played political card, which must be removed as soon as possible”

President of the United States Joe Biden announced his intention to run for the presidency in 2024 if health will allow him. At the same time, the rating of his approval has once again updated the anti-record: 55% of the country's population are dissatisfied with the activities of the American leader. The political scientist explained what Biden hopes for and for what purpose he makes such statements. 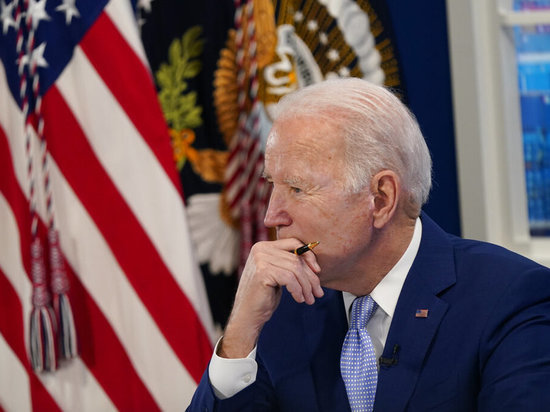 “Look, I really respect fate, & ndash; Biden said in an interview with ABC when asked if he plans to run for a new presidential term in 2024. & ndash; Fate intervened in my life many, many times. If I was in the state of health I am in now, that is, in good health, then in fact I would be running again. ”

Moreover, he said that he was also ready to fight the former American leader Donald Trump.

“ Why don't I run against Donald Trump as a candidate? This will increase the chances that I will run '', & ndash; added by Biden.

Meanwhile, Biden's approval rating among the US population is poor. So, according to a poll by the sociological service The Marist Institute, only 41% of Americans approve of Biden's activities as head of the White House. At the same time, 55% of the 1,400 Americans over 18 who took part in the survey said they were unhappy with the president's actions.

This is also the lowest approval rating for Biden since he took office, the service noted. It is, in particular, associated with rising prices, the coronavirus pandemic and the blocking of the bill to increase social spending.

Vladimir Vasiliev, chief researcher at the Institute of the USA and Canada of the Russian Academy of Sciences, is sure that Biden's statements about his desire to participate in the next presidential elections are connected with the activities of the Democratic Senator from West Virginia Joe Manchin.

“ Recently, Manchin announced that he would not support the $ 2.4 trillion domestic investment bill by the head of the White House, & ndash; he comments on MK. & ndash; It turns out that the fate of this initiative has actually been decided. And this, by the way, is the main pre-election promise of the American leader, on which, in fact, the entire domestic political agenda rests. Biden has exhausted himself as a candidate for the head of state. You can even assume that his presidency is largely over.

Although there is still a possibility that this package of $ 2.4 trillion will be divided into several bills and pushed through in small portions in the new year. So the situation is not so pessimistic.

The point is that Joe Manchin is not just expressing the point of view of oil and gas corporations (at least those who support Democrats) who oppose green technology. And as a matter of fact, the main thing in this bill is & ndash; putting the American economy on a green track. He also pursues political goals. Today it was Manchin who was talked about as a possible presidential candidate for 2024 from the Democratic Party. This is what all this demarche was for.

Manchin & ndash; centrist. It cuts off the left wing, which contributes to a right turn and the strengthening of right-wing forces in the Republican Party, including justifying the possible claims of the former head of the White House, Donald Trump. But if the “ leftists '' cut off today, then Trump's position is also becoming precarious, since it is building its election campaign precisely on the fact that America is sliding to the left & ndash; into socialism, communism. ''

According to the expert, Biden today lost all control over the party. It gradually disintegrates into small fractions (moderate, left-wing radical, realists). And against this background, they started talking about Manchin as a very energetic, adequate senator who can unite the Democrats, put an end to all intra-party uncertainty and create a bipartisan consensus with the Republicans – what the American leader himself promised at one time.

“ Everyone thought it was unlikely given America's polarization, & ndash; the political scientist continues. & ndash; But not now, when the Republicans have begun to flirt with Manchin to such an extent that they even offer him to join the party. Plus, in many of his positions, the senator has already expressed solidarity with the conservatives. A very interesting situation has emerged in which he could potentially return the American political system to the “ normality '' that was before Trump. That is, it will create the so-called “ one and a half party '' a system where the center is made up of conservative Democrats and liberal Republicans.

Today, it is not customary for politicians in the United States to announce their intentions to run for the head of state while the president and his team are in office. Moreover, Biden has already announced that he will go to the next elections together with Kamala Harris. That is, the 2020 tandem will be present in 2024 as well. Therefore, everyone is silent.

Joe Manchin broke this wall. There is talk that the Democratic Party has finally nominated, in fact, a very attractive candidate. And this unpleasant situation hung over Biden. Many even accuse Manchin of having started and promoted all this for the sake of the presidential race.

In fact, the senator's plans for 2024 are known. He still has quite a bit of & ndash; take and declare that he is ready to participate in this presidential election. Then the Democrats will start a collapse. All other possible candidates from the Democratic Party will rush into this opening, believing that Biden and Harris & ndash; this is a completely played out political card and it is necessary to get rid of it as soon as possible.

The ground under Biden's feet is burning. The Democratic Party is not just spinning out of control, it has actually found an alternative to the current leader. Therefore, he has to take decisive and sometimes very unexpected steps. So, the other day the head of the White House made a truly stunning statement. He said he appreciates the Trump administration's efforts to develop a vaccine. It was just a sensation! The Republican was also shocked and pleasantly surprised. But this is the same equivocal. Biden understands very well that he needs to appear as a unifier and, of course, convince the party and the electorate that he is still in the cage. ''