On the night of December 19, three military transport aircraft landed at the Chkalovsky airport near Moscow and flew to Kabul and back … The MK correspondent accompanied the humanitarian flight and for the first time visited Afghanistan, where the government changed this year.

On the eve of our planes delivered 36 tons of humanitarian aid to the Kabul airport. They brought food – rice, flour, sugar, as well as the necessary medicines. Everything was handed over to the Afghan authorities and will be distributed among those in need.

The situation at the Kabul airport was quite calm. And, if according to the stories of colleagues, back in August, near the territory of the airport, shots were heard, now the silence is disturbed only by the roar of aircraft, which, it should be noted, run continuously. These are mainly flights from the United Arab Emirates and Turkey.

Deputy Minister of Emergency Situations of Afghanistan Gulyam Gauss Naseri thanked the Russian Federation for the assistance provided to the Afghan people.

“First of all, I would like to express my gratitude to the Russian Federation and, in particular, the Ministry of Defense and the Ministry of Emergencies, which participated in the formation and delivery of this humanitarian cargo for our country,” he said. – First of all, aid will be directed to meet the needs of the poor.

Regarding the very socio-economic situation in Afghanistan, the official spokesman added that it remains difficult so far.

“Winter is approaching, so medicines and food delivered from Russia are of vital importance to the Afghan people. I hope that they will allow people to survive this difficult time.

Russian Ambassador to Afghanistan Dmitry Zhirnov noted that this is the third large landing with humanitarian supplies from Russia since November.

– In total in Afghanistan has delivered more than 100 tons of humanitarian aid, – said the ambassador. 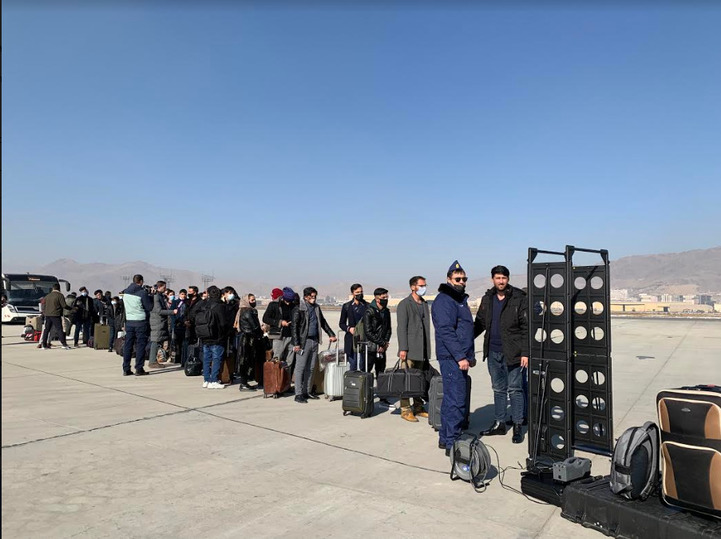 After operational unloading – landing of evacuees. This is almost 200 people. Mostly citizens of Russia, including those of Afghan origin, and citizens of Kyrgyzstan. Afghan students studying at Russian universities were also removed from Kabul.

Before boarding, all passengers were screened with the help of metal detectors and frame-scanners specially installed near the aircraft. Their personal belongings and luggage were also carefully checked.

In addition, the planes delivered medical and nursing teams of military medics with the necessary equipment and medicines to the capital of Afghanistan. A supply of drinking water, food and warm blankets was formed to ensure the flight of evacuees.

– I am very grateful that Russia did not leave us, – Abdurahim, a native of Kandahar, is unable to hide his emotions. – After the Taliban came to power (the Taliban is an organization under UN sanctions and is banned in the Russian Federation. – MK), it became very dangerous to live in Afghanistan.

The man said that seven years ago he came to Moscow study and work. Soon he started a family and received a Russian passport. Before the change of power in his native country, he came to visit relatives twice a year. Two months ago, despite the turbulent situation, he risked flying to Afghanistan to visit his mother. I traveled through Tajikistan. However, I could not fly back to Russia on my own.

On the night of December 19, after an intermediate landing at the airfields of Gissar (Tajikistan) and Kant (Kyrgyzstan), the planes with evacuated citizens landed at the Chkalovsky military airfield near Moscow.

MK will tell you more about the humanitarian mission of the Russian Aerospace Forces in the following reports.