Our special correspondent reports from Donbass

– Would you like to write about a hero? – Tannin's unexpected question pulled me out of the virtual world of the World Wide Web. We have just returned from a position where we were deprived of not only access to the Internet, but even to ordinary cellular communications all day long. Information hunger prevailed over the physiological one, so instead of having dinner, everyone was sitting on their phone. 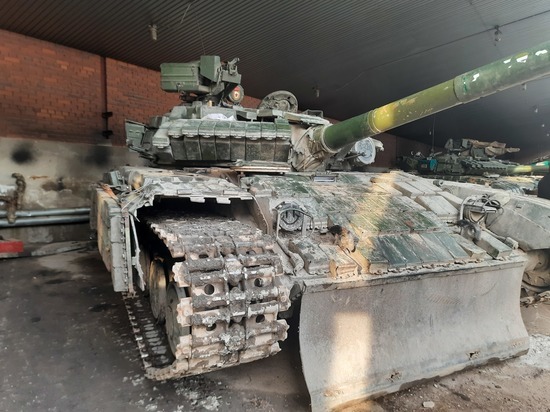 I met Tanya quite recently. A few days ago we came together with a humanitarian cargo from Russia to Donetsk. A beautiful, resolute brown-eyed brunette in a T-shirt with the Z symbol. In 2014, when she first came to the Donbass and saw with her own eyes what was going on here, she could no longer remain indifferent. Since that moment, for eight years now, one of the main goals of this fragile girl is to help the defenders of Novorossia and its civilians.

– A guy, a tanker. He lived behind enemy lines for 12 days after his tank was hit by dill. They gave the Hero of the Republic.

Gorlovka is one of the largest settlements in the Donetsk region, located less than fifty kilometers from Donetsk. Since 2014, it has been under the control of the Donetsk People's Republic. And since 2014, for a long eight years, civilians in Gorlovka have been shelled almost daily by the armed formations of Ukraine. I happened to be here at the very beginning of the special operation, when two teachers were killed as a result of shelling with a 152-mm shell that hit the facade of the school.

The road from Donetsk to Gorlovka is also far from the most peaceful place, so we equip ourselves right away: bulletproof vests, helmets. We rush to the city without stopping. In the distance, something bangs.

– This is the “exit,” the driver explains in Donbas slang.

Locals have long learned to identify “arrivals” and “exits” by sound, for me everything sounds the same.

Despite the distant explosions, there are not a few people on the streets. The city lives a normal life. Near the bus stop, Easter cakes are sold from a wooden counter, people lined up.

– And when is Easter? – I suddenly wonder.

– So the day after tomorrow already, – the driver laughs. – Are you already confused in the days? No, it happens here.

– I lived in Gorlovka for some time, – says Tanya. – I love this city. And here is the most delicious ice cream in the world. If it's not too late, we'll come back, we'll stop by, we'll buy it. Now there is no time, the commander asked not to be late.

– Agreed, – Tanya's proposal, which, by the way, was not destined to be realized, seemed very tempting.

We turn to the checkpoint, the soldier demands to stop with a gesture.

– We are to the commander, he is waiting, – leaning towards the driver, Tanya reports through the open window.

The military can be heard asking for someone on the radio and, having received confirmation, allows them to enter the territory.

– This is the commander of the Gorlovsky tank battalion, – Tanya introduces me to a handsome, strong young man in uniform. For obvious reasons, I can't give his name.

– Well done for coming, – the military man smiles. – Well, what can I show you?

– So we have every second hero here, choose.

– No, I’m specific, who lived behind enemy lines.

– And it's not there yet. He went home to his mother, but she hadn't seen him yet. I already mentally said goodbye to my son when they brought the pro-rocket home. It will be soon, don't worry.

While we are waiting for the hero, we are examining the tanks standing in the hangar. The fighters share that they freed Volnovakha on them, stormed the enemy, and were ambushed themselves.

The fights were very hard. Every day, house by house, the people's militia servicemen liberated the city. During the special operation, they used new military tricks and tactics, for example, such as the “tank carousel”. Among the regular T-72s, two T-64s also wormed their way. One of ours, one captured T-64 BV. It, as it became clear from the story of the military, is used as a “donor”, in other words, they are dismantled for spare parts to repair their “sixty-four”.

– And here is our hero, – the voice of the commander interrupts the story of the mechanics.

– Although he is a little shy, he will tell you everything.

A young man in a blue-red jacket really looks a little embarrassed. The driver of the 1st tank company, private Yevgeny Donchenko, says that he came to the service quite recently, only five months ago. The reference point in the choice for the guy was his father, who also once served in the tank troops. Prior to that, Eugene worked at the mine.

– Have you ever thought that you would put on a uniform, sit in a tank and accomplish a feat?

– No, – he smiles embarrassedly.

The tanker restores the events of those days in stages. On February 26, marching through Yenakiyevo, they drove to Volnovakha. The crew of Donchenko knocked out a Ukrainian sniper, after which they held the defense of the right flank. On February 27, the crew took part in a tank battle, where the enemy forces outnumbered them by several times.

“I saw at least four enemy tanks and one infantry fighting vehicle,” says the tanker. – We went first in the column. At some point, a Ukrainian tank was noticed, it fired a shot and thus identified itself. After that, the DPR fighters opened fire on an enemy tank. The enemy, in turn, opened the counter.

– The last thing I heard from the commander: “Zhenya, to the right.” I turned. I remember seeing two enemy tanks. At this point, our smoke protection went off. There were shots, clapping. I shout to the commander: “Cap, there are two enemy tanks on the right,” but our gun does not turn. I immediately knew that something terrible had happened. At that moment an infantry fighting vehicle opened fire on me…

The diesel fuel caught fire from the hit inside the tank. According to Yevgeny, by some miracle he managed to turn on the second gear and abruptly jump out from under enemy fire. After driving about a kilometer, the serviceman was able to put out the diesel fuel, which continued to burn near the ammunition shells. The upper hatch was blocked, so Evgeny managed to get out only through the lower one.

– I shouted to the boys for a long time, but they didn’t answer, the tanker continues his story.

By that time, Donchenko’s crew had already was dead. To stay alive, the fighter made the only right decision – to leave the tank. The fact that he was behind enemy lines, the guy did not immediately understand.

Having reached the school building, Eugene noticed a motor scooter. I asked the driver how to get to the Volnovakha sign.

– The man said that if I ran, it would take about thirty minutes, – the guy recalls.

The tanker realized that it was pointless to run does not have. At that very moment, a resident of a nearby house noticed him. Eugene asked her for help and, despite the great danger, the woman agreed and let him into her house.

– I spent twelve days there until ours arrived.

– How are you lived this time? Did you try to get to your own?

– I couldn't. There were heavy shelling, the Ukrainians mined the roads. Aunt Sveta and I hid in a hole in the annex. Enemy equipment stood between residential buildings and fired from there. We even had to concrete the window in the hall.

Evgeniy admits that at first he was afraid that the woman might betray him to the Ukrainian troops, but then he realized that she was a good person. Now Aunt Sveta is like a second mother to him.

At first, the guy heard the radio about the fact that the troops of the DPR had entered the city. And then he saw his people through the window and went out. “Like a stone fell from my soul,” the military admits.

– All these days you were considered dead?

– Yes, they brought a funeral to my mother. When I was already at my place, I called her and said that everything was fine with me. At first she couldn't believe it.

When I asked if Yevgeny feels like a hero, the guy replies that, first of all, he feels sorry for the guys from his battalion who did not manage to survive in that battle.

< p> – All that I can do in memory of them is to continue to serve our republic and Russia.