“They realized that no one would save them”

In the operation to liberate the territory of the Donetsk People's Republic, the heaviest fighting took place in Mariupol in recent weeks. The militants of the national battalions desperately resisted, hiding behind civilians. They also served as detachments for ordinary military units of the armed forces of Ukraine. But there seems to be a fracture in this area. On April 4, 267 marines from the 503rd Separate Battalion of the 36th Separate Marine Brigade of the Ukrainian Navy laid down their arms. 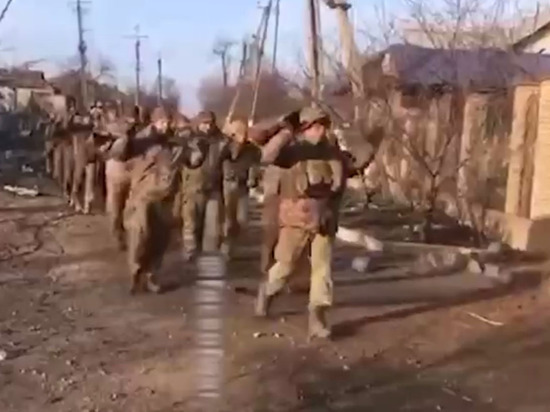 The head of Chechnya, Ramzan Kadyrov, was the first to announce the surrender of the Marines on his Telegram channel. There was a video with the prisoners. Later, another one – State Duma deputy Adam Delimkhanov talks with Ukrainian servicemen.

“I'm glad you made the right decision,” he told the Ukrainian military. – It is pointless for you to fight further. You gave an oath to the Ukrainian people, but we came here not against the people of Ukraine, but against the Nazis and those shaitans who also killed civilians in Chechnya. And we will destroy them here.

Ukrainian marines were guaranteed that no one would harm them, and that they would be treated in accordance with international law.

Military expert Captain 1st Rank Volodymyr Dandykin told what could have prompted the elite unit to lay down their arms.

– It so happened that I was in Sevastopol at the time when the formations of the Marine Corps of Ukraine were formed. This happened back in 1993, when I myself served in the Black Sea Fleet. I remember I went to one of the marine battalions in Perevalnoye, formed on the basis of the former marine brigade of the Black Sea Fleet. It caught my attention that their motivation and values ​​were already in favor of Bandera.

The political officer of the battalion had CDs with songs about Stepan Bandera, he said that these were gifts from Canada. Also, everyone already had serious equipment and weapons. It was one of the most elite units along with the air assault units of the Armed Forces of Ukraine.

When the “Crimean spring” happened, the most motivated and almost the only part of the Armed Forces of Ukraine, which almost in full force went to Ukraine, was the battalion of marines, which was stationed in Feodosia. In 2014-2015, they participated in the battles in the Donbass, where along with the Nazi battalions demonstrated extreme cruelty towards the civilian population.

We can safely say that the 36th Marine Brigade is one of the most combat-ready formations, along with the same “Azov” (recognized as extremist, banned on the territory of the Russian Federation. -"MK"), imprisoned for fighting in Mariupol and Donbass. The fact that now the remnants of this battalion have surrendered speaks of the military and moral breakdown of the group. It's obvious.

– I think they realized that no one will rescue them. And, probably, the fact that the Ukrainian helicopters that flew in to evacuate the militants from Mariupol also had an impact was shot down. Perhaps among those who were trying to take out were some high-ranking mercenaries or foreign instructors, history is silent about this. But the Marines realized that they would only save those who needed to be saved. They say that the losses in the Mariupol “cauldron” the APU is huge. But the Ukrainian forces concentrated there were the most motivated and prepared. In my opinion, for Russia this is not just a huge moral victory, it is also a blow to the combat strength of Ukraine. It is time for Kiev to declare mourning.

– Of course. This is a necessary element of counter-propaganda work. Communication with relatives also played a role. All together.

– I think so. The next grouping will be located on the Donetsk front, where our troops are now being transferred. But it will be another “cauldron” with many more people.