North Korea conducted a successful test aimed at “improving the effectiveness of the use of tactical nuclear weapons.” The launch was personally observed by the head of the DPRK, Kim Jong-un. 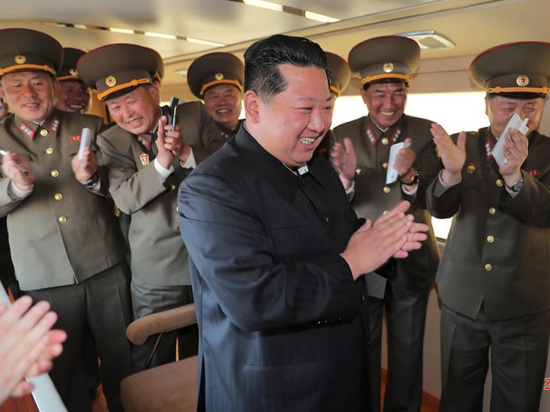 In North Korea under the supervision of leader Kim Chen Un has been tested on a new weapons system that is said to improve the effectiveness of his tactical nuclear weapons, state media reported.

“This new type of tactical guided weapon system, developed with the special attention of the Central Committee of the Party, is of great importance in the rapid increase in the ability of front-line long-range artillery units to deliver a fire strike and strengthen the efficiency of commissioning tactical nuclear weapons of the DPRK and diversifying their fire missions,” &mdash ; said the official Korea Central News Agency, saying that the tests were successful.

The South Korean military said Sunday that North Korea fired two projectiles off its east coast towards the sea on Saturday. Projectiles fired from the Hamhung area around 18:00 flew 110 km at a maximum altitude of 25 km with a maximum speed of less than Mach 4, the South Korean Joint Chiefs of Staff said.

In photographs published by Rodong Sinmun newspaper ;, shows a smiling Kim Jong-un surrounded by uniformed officials cheering as he watches what he says was a test launch.

On Friday, North Korea celebrated founding leader Kim Il Sung's birthday with a massive public procession, fireworks and synchronized dancing, but not a military parade as many observers predicted, according to The Guardian.

Analysts, South Korean officials Korea and the United States also considered it possible to conduct nuclear tests on an important anniversary. The anniversary celebration comes three weeks after North Korea conducted its largest-ever test of an intercontinental ballistic missile — for the first time since 2017, Kim's most powerful weapon was fired at full range.

The test was the culmination of a record string of launches in violation of sanctions this year and marked the end of a voluntary moratorium on long-range and nuclear testing, according to The Guardian.

Long-range and nuclear testing have been suspended since Kim Jong-un met with then US President Donald Trump.

Officials and analysts say North Korea may conduct a seventh nuclear test in the coming weeks. Satellite images show signs of new activity in a tunnel at the Pungeri nuclear test site, which North Korea says was demolished in 2018 ahead of the first Trump-Kim summit.

North Korea has tested nuclear weapons six times since 2006 of the year and touted the success of their latest and most powerful 2017 — a hydrogen bomb with an estimated yield of 250 kilotons.

With a new nuclear test, experts say Pyongyang will seek to miniaturize nuclear warheads for mounting on its intercontinental ballistic missiles (ICBMs).

South Korean officials said that Pyongyang could still hold a military parade or conduct a weapons test on or about April 25, the anniversary of the founding of the Korean People's Army. This anniversary coincides with joint military exercises between Seoul and Washington, due to begin on Monday. South Korea and the United States regularly conduct military exercises, but Pyongyang has long protested against the exercises, considering them a rehearsal for war.