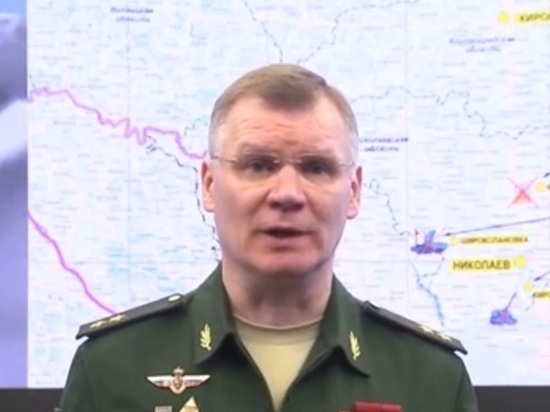 Photo: Frame from the video

The Russian Ministry of Defense reports that the storage base with the information received by the Kyiv regime was destroyed near the village of Radekhiv, Lviv region of Ukraine from Poland with weapons and ammunition of foreign production. Russian troops attacked with high-precision long-range air-launched missiles.

And also, as Lieutenant General Igor Konashenkov, official representative of the Russian Ministry of Defense, pointed out, four depots of missile and artillery weapons and ammunition were destroyed. The storage of fuel for military equipment was liquidated.

In addition, Russian troops managed to hit three command posts, including a battalion of the 72nd mechanized brigade and the 65th mechanized brigade. The manpower and military equipment of the Armed Forces of Ukraine in 133 districts were liquidated.

The day before, on August 2, it was reported that the Russian Aerospace Forces attacked the bases of the Armed Forces of Ukraine near the settlements of Merefa and Chuguev in the Kharkiv region with high-precision weapons. As a result of the strikes, up to 500 soldiers of the Ukrainian army were eliminated.

In addition, a significant amount of military equipment was destroyed during the strike, Konashenkov shared the details.