Why official Kiev needed “many meetings with Putin”

One man. Two opposite and even mutually exclusive positions. President of Ukraine Volodymyr Zelensky on the prospects for his meeting with Putin: “I don’t think we can get by with one meeting. I don't think it's possible to meet once and agree on everything. Because there are many questions. I don’t see in some yet that they will go for our version or we will go for their version.” Zelensky again – this time about his readiness to refuse negotiations with Moscow if the Russian army does not stop in Mariupol: “I want to say that the destruction of our military, our guys, will put an end to all negotiations.” Interestingly, does Zelensky himself know what he wants and what he is going to do, even if only in the very near future? Knows. And we can easily find out, too, if we focus on a single key fact. 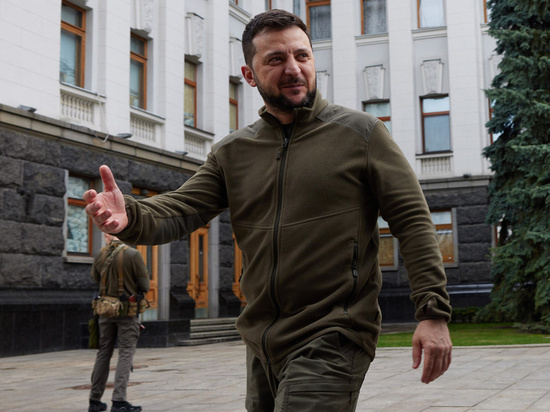 2022 was the most terrible time in the modern history of Ukraine. And it also became a high point for one single citizen of Ukraine named Vladimir Aleksandrovich Zelensky. Who was Zelensky before the current escalation? A failing president of a failing country. “Provincial” a politician to whom European functionaries like Josep Borrell could arrogantly declare to his face: “The EU — this is not a charity or an ATM machine. A leader who struggled to hold the title of “first among equals” even within Ukraine itself. And who did Zelensky become after February 24? Political superstar of the world scale. The news of this weekend: on the website of the American White House they began to sell collectible coins with the image of the President of Ukraine. On one side of the numismatic product, the faces of Zelensky and Biden flaunt against the background of the Ukrainian and American flags and the slogan “We are one”, and on the other — Zelensky in a T-shirt on the screen of a huge video monitor during his speech to the US Congress in March this year.

Come on people! Just $100 — and this “masterpiece of monetary art” your. And they will fly! Today Zelensky — this is the latest western political fashion. Is there even one cult Western parliament left in the world in which he has not spoken yet? There was a German Bundestag, there was also a British House of Commons. Israeli Knesset? Also noted here. Everything is good with the President of Ukraine in terms of sociology within his country  (At least, according to the reports of local sociological services). Zelensky's rating in August 2021 — 27.2%. Zelensky's rating in the spring of 2022 — 91%. What does this matter against the backdrop of what is happening in Ukraine and around Ukraine? Personally, for Vladimir Zelensky, the most important thing. Look at his public appearances. And you will see  a man on the crest of a wave, a man who gets high.

Separate “unconscious personalities” criticized the President of Ukraine for “carelessness of the wardrobe”; during his video appearances in front of Western parliaments. What ignoramuses! Churchill's close friend and drinking companion, the British Minister Lord Birkenhead, once remarked: “Winston spent the best years of his life writing impromptu.” In the same way, “carelessness of the wardrobe” Vladimir Alexandrovich is the fruit of careful reflection: in what kind of entourage “president-hero” should appear before his Western “allies and admirers”? In a strict European suit? Won't go. It will not be in the “spirit of the moment.” In Ukrainian  national dress — for example in an embroidered shirt? It won't work either. This will give a “political” moment either comedy, or an excessive folklore bias. It remains a mixture of casual and military style. Bingo! In 2002, Western designers recognized “the most elegant man in the world” Hamid Karzai, who had just been appointed by the Americans to the post of leader of Afghanistan, with his signature capes and astrakhan hats. I won’t be surprised if Zelensky gets such an honor in 2022.

What am I leading to? To the fact that political leaders — they are to a very large extent hostages of their first profession, which they were engaged in before fortune pushed them to the top. A professional lawyer, having become president, will still remain a lawyer in the post of head of state. The same applies to the professional economist, professional financier, or professional soldier. And who is Zelensky in his first profession? That's right, the actor who now got the “scene” for himself the size of the whole world. I am sure that you are now feeling some disappointment because of the simplicity and obviousness of my conclusion. But this is disappointing — a consequence of the fact that no one bothered to analyze what lies on the surface.

Actors — this is a very special breed of people whose representatives perceive the rest of the world as a scenery built around their own person. And the political actors — this is a very special breed of politicians. Consider, for example, Ronald Reagan. How he could motivate! What wonderful speeches he made! And how little he delved into the “boring” details of government. While this US president was doing representation, the “details” others sucked for him. Of course, Zelensky and Reagan — These are leaders of fundamentally different levels and scales. Reagan had principles and a great vision. Zelensky's — only acting skills, the desire to like, receive applause and constantly remain at the peak of popularity. And this gives us very important material for analysis. Why, “important material for analysis”! This gives us a clue, a psychological mechanism that allows us, to a certain extent, to predict what will happen next  behavior  President of Ukraine.

Expect from Zelensky consistency and logic of actions — not very logical in itself. “Logic” in the understanding of Zelensky — it is a constant search for more and more “theatrical scenes.” Now his “scene” — this is Mariupol, where he is the «heroic commander-in-chief» orders his subordinates to “stand to the end.” But at the same time, his restless mind is already looking for a new hypostasis — Putin's equal partner in multi-day negotiations. At the same time, the essence of these negotiations is completely unimportant. Only the picture matters. And again the question may arise: why all this talk? What useful information does he give? For example like this. What is psychologically absolutely unacceptable for a professional actor? The situation in which, as an assessment of one's “stage skills” he receives not applause, but a stream of ridicule, curses and rotten apples.

Conclusion: Zelensky will sign an agreement acceptable to Moscow only if official Kyiv is completely cornered. Or he won't sign it at all. And here's the most interesting thing: in terms of reading the psychological picture of his fellow presidents, Vladimir Putin, I'm sure, understands this very well. But how does this circumstance fit into the general political strategy of GDP? Here I am forced to stop for now due to lack of data. Predicting the actions of a professional intelligence officer is much more difficult than predicting the actions of a professional actor.