Another conflict is brewing between the Bosnian Serbs and Sarajevo

Another conflict seems to be brewing in the Balkans. The Bosnian Serb leadership is trying to & mdash; at least in words, & mdash; expedite the withdrawal of the Republika Srpska from the state institutions of Bosnia and Herzegovina. According to the leader of the Bosnian Serb Coalition Milorad Dodik, a decision should be made by the end of January. Earlier, it was already about a six-month period, which, after all, gave the parties room for maneuver in negotiations. Is it far to a new hot phase of the smoldering Balkan confrontation? 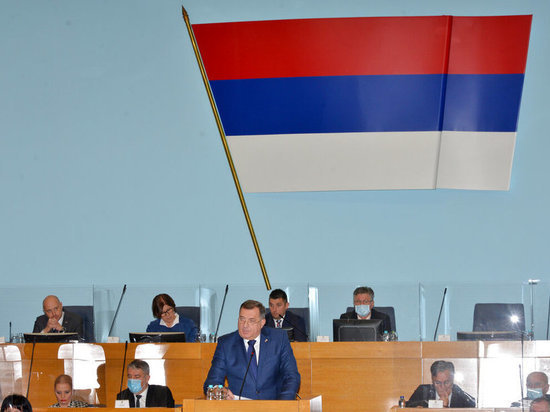 At the beginning of December, deputies of the People's Assembly (Parliament) of the Republika Srpska voted for the withdrawal of representatives of the republic from the Bosnian armed forces, as well as the judicial and tax system. Legislatively, it was decided to fix this in special acts, the development of which was officially set aside half a year & mdash; that is, until May 2022 inclusive. Draft laws must also be previously coordinated with the authorities of Bosnia and Herzegovina, otherwise political disagreements can easily turn into real clashes.

However, parliamentarians have authorized the regional government in the next 6 months to develop new laws for the army, tax and judicial system to replace the existing regulations of Bosnia and Herzegovina.

Nevertheless & nbsp; the leader of the ruling coalition of Bosnian Serbs Milorad Dodik announced that laws on a new judicial system on the territory of the Republika Srpska will be adopted in January, which, in fact, will remove the semi-autonomous entity from the jurisdiction of the authorities of Bosnia and Herzegovina.

Dodik found a formal reason for haste easily. The fact is that even after the announcement of plans for a six-month revision of the legislation, the prosecutor's office of Bosnia and Herzegovina opened a case against the authorities of the Republika Srpska & mdash; for an alleged attempt to 'undermine the constitutional order'.

Dodik made good use of this, demonstrating: look, they say, we are ready to negotiate, but we are already being put in the position of the accused.

All this tension at the level of rhetoric in the case of the Balkans is much more dangerous than in many other troubled regions. From the times of previous conflicts, there are plenty of weapons here, as well as “ hotheads '' who, due to legal delays, may try to take real power into their own hands. This attracted the attention of the statement of Dodik, an infrequent front-page news hero.

At the same time, as he noted in a conversation with MK Pavel Kandel, a leading researcher at the Institute of Europe of the Russian Academy of Sciences, Ph.D.“ I don't think a new war will happen in the near future, and the question remains even whether the reform announced by Dodik will be carried out, '' mdash; explained our interlocutor. & mdash; The fact is that when his proposals were voted on in the People's Assembly of the Republika Srpska, the opposition & mdash; and these are also Serbian parties & nbsp; and, let's say, no less nationalist-minded than Dodik's (perhaps even more), & mdash; voted against. Therefore, the situation is ambiguous. And all Dodik's statements, the next “ initiatives '' & mdash; in fact & nbsp; the usual electoral trick, regularly practiced by him & nbsp; and all Balkan leaders. On the eve of the election campaign, they need to start a “ war '' with some enemies & mdash; whether internal, external, & mdash; This is what we are observing now. '' the proposed measures, but their untimeliness.

“ On the eve of the previous elections, there was already a similar situation, & mdash; reminds an expert. & mdash; And also loud statements by Dodik sounded, with which the Western countries, inadvertently, played along, attacking him with accusations: and this was all he needed – & mdash; to show how he allegedly fights for the national just cause, for which he and the enemies are “ rinsed ''. As a result, he won the election. Now he is essentially using a similar scheme. At the same time, after the last elections, promises like a referendum on the secession of the Republika Srpska from Bosnia and Herzegovina were postponed indefinitely & mdash; due to “ out of date ''. Although this was one of the main threats. ''