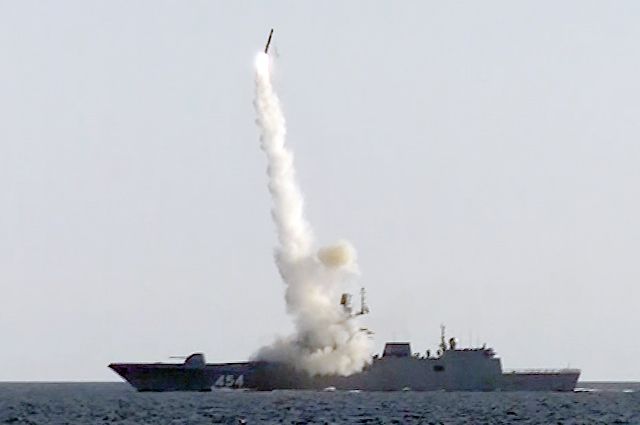 Tsirkon hypersonic missile for placement on surface ships of the Russian Navy can be put into service before the end of 2022. It is expected that state tests will be completed in the next five months.

Currently, the Reutov NPO Mashinostroeniya (part of the Tactical Missiles Corporation) is mass-producing Zircons, and work is also underway to increase the range rocket flight. On August 24, 2021, a contract was signed for the supply of “Zircons” in the variant of ammunition for surface ships. Obligations for the supply of missiles must be met before 2025.

Earlier it was reported that the test launch of the Zircon hypersonic cruise missile, which was carried out at the maximum range, on May 28, was the final one in the framework of state tests of the product from a surface carrier. The launch was carried out by the Project 22350 frigate Admiral Gorshkov of the Fleet of the Soviet Union. He fired with a Zircon missile. from the waters of the Barents Sea at a sea target in the White Sea to a maximum range of about 1,000 km. According to objective control data, the missile successfully hit a sea target, the flight met the specified parameters, no other details were reported. It was reported that with this test, the missile confirmed its characteristics, and based on its results, it was decided to accept it into service with the Navy.

Earlier, in 2021, more than a dozen launches of Zircon were performed; from surface and submarine ships. Control firing was carried out on November 18, 2021, then the same frigate of the Northern Fleet “Admiral Gorshkov” launched a missile at one of the ranges in the White Sea, hitting a sea target with a “direct hit”. Later, on December 24, 2021, a salvo launch of the Zircon was announced, which also went without any complaints.

“Zircons” frigates of project 22350 will be armed. The first regular carrier of the complex will be the frigate of this series “Admiral Golovko”. It is expected that the nuclear cruiser Admiral Nakhimov, which is currently undergoing modernization, will also be armed with these missiles. “Zircon” have been developed since 2011, initially the armament was created in marine and aviation versions, later only the marine version was developed. At present, industry and the Navy will continue work on a new modification of this missile system designed for submarines. These works will be completed by 2025 and will lead to the rearmament of two types of ships. The first regular carrier of the new missiles will be the Perm multi-purpose submarine. project 885M, designed for the Pacific Fleet. This is a Yasen-M class missile carrier. It was also reported that the creation of a new coastal missile system for the Zircon hypersonic cruise missile began.

Despite the fact that the missile should be put into service in the near future, very little is known about its tactical and technical characteristics, and most likely additional information will not appear in the near future due to the high secrecy of this weapon.

It was stated that the rocket from the complex is capable of reaching speeds equal to 9 Mach numbers (speeds of sound), has a range of more than 1 thousand km. It is assumed that this is a two-stage rocket, its first stage is equipped with a solid rocket engine, and the second — direct-flow air-jet. Judging by the standard containers in which the missiles are delivered to the ship as part of the tests, the length of the Zircon does not exceed 9 meters, and the diameter — 60 cm. It is alleged that the missile currently has no analogues in the world and is capable of performing a long aerodynamic flight with maneuvering in dense layers of the atmosphere, using its own engine thrust throughout the route.

This missile is planned to replace a heavy anti-ship missile P-700 “Granite”. The fundamental difference of this missile is a significantly higher flight speed compared to both other Russian anti-ship missiles and anti-ship missiles in service with other countries, which makes it impossible to intercept it for existing enemy missile defense systems. This allows it to reliably destroy enemy surface ships of various classes: from frigates to aircraft carriers. The missile should be used against single and group surface, and in the future also ground targets.