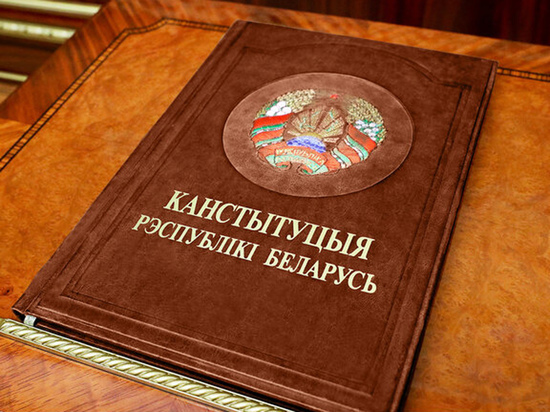 Minor amendments have been made to the chapters and chapters 1 and 2 to give the country's Constitution a more modern look and prioritize. For example, a postscript appeared in the introductory part that the people of Belarus adopt the Constitution not only on the basis of the inalienable right to self-determination, but also on the basis of “preserving national identity and sovereignty”. A new goal of the Constitution has also been added – “wishing to ensure peace and civil harmony, the well-being of citizens, the inviolability of democracy, independence and prosperity of the Republic of Belarus.”

Article 7 states that the Constitution has the highest legal force in the country. “Other legal acts are issued on the basis of and in accordance with the Constitution.” Article 15 says that the state is now responsible not only for the preservation of the historical, cultural and spiritual heritage, but also “ensures the preservation of the historical truth and memory of the heroic deed of the Belarusian people during the Great Patriotic War.” And an important addition appeared in Article 18: “The Republic of Belarus excludes military aggression from its territory against other states.” Another novelty of state responsibility: “The state creates conditions for the protection of personal data and the safety of individuals and society when using them.” An important clarification appeared in the “family” section: Article 32 of the Constitution, in spite of the newfangled tendencies, consolidates the concept of marriage as a union of “man and woman”. And the parents are now charged with the obligation not only to educate their children, but also “to prepare them for socially useful work, to instill culture and respect for the laws, historical and national traditions of Belarus.” There was also a new article dedicated to youth. It says that “The state promotes the spiritual, moral, intellectual and physical development of young people, creates the necessary conditions for their free and effective participation in public life, realizing the potential of young people in the interests of the whole society.” In the section on health protection, an important nowadays postscript has appeared: “Citizens are obliged to take measures to preserve and strengthen their own health.”

We pass from rights and obligations to the political part, in which the most changes have appeared. In the article about the right to vote, a line has been added: “They do not have the right to elect and be elected … persons held by a court sentence in places of imprisonment.” A line was added to the article on the financing of elections that “It is prohibited to finance the costs of preparing and holding elections by foreign states and organizations, foreign citizens, as well as in other cases stipulated by law” – again in the spirit of the times.

In the section on elections, for the first time, a completely new political structure of Belarus is mentioned – the All-Belarusian Assembly. Article 71 states that “The chairman and members of the Central Election Commission are elected for five years and dismissed by the All-Belarusian People's Assembly.” This structure also appears in the chapter on referendums, as one of the possible initiators of plebiscites. Citizens should be especially pleased with the new edition of the chapter on the president. It says that “One and the same person can be President for no more than two terms.” The requirements for presidential candidates have also changed. Now people under 40 cannot run for office. In addition, a candidate must have lived in the Republic of Belarus “for at least 20 years immediately before the elections.” Plus – not to have previously “citizenship of a foreign state or residence permit or other document of a foreign state.” As for the powers of the president, he can now appoint the prime minister with the consent of the House of Representatives, Board

Of the National Bank – “with the prior consent of the Council of the Republic”. The President has the right to impose a state of emergency in the event of “attempts to violently change the constitutional order, seizure or appropriation of state power, armed insurrection, mass and other riots.”

But the president himself can be removed from office by the all-powerful All-Belarusian Assembly – “in the event of a systematic or gross violation of the Constitution or committing high treason or other grave crime.” The people themselves can send a request to the Assembly to remove the president, having typed at least 150 thousand signatures. If the president is unable to fulfill his duties, they now pass not to the prime minister, but to the Chairman of the Council of the Republic. And here is another “sign of the times”: “In the event of the death of the President as a result of an attempt on his life, the commission of an act of terrorism, military aggression, as a result of other violent actions: meetings of the Security Council are held under the leadership of the President of the Council of the Republic; a state of emergency or martial law is immediately introduced on the territory of the Republic of Belarus on the basis of a decision of the Security Council in accordance with the established procedure; state bodies and officials act in accordance with the decisions of the Security Council. ”

A whole chapter is devoted to the new political structure – the All-Belarusian People's Assembly. The Constitution defines it as “the supreme representative body of democracy in the Republic of Belarus, which determines the strategic directions of the development of society and the state, ensuring the inviolability of the constitutional order, the continuity of generations and civil harmony.” The delegates to the assembly are the current and former presidents, representatives of the legislative, executive and judicial branches; representatives of local Councils of Deputies;

representatives of civil society, elected from each region and city of Minsk … The maximum size of the Assembly is 1200 people. The term of office is five years. Just like the President and Parliament. What is included in the powers of this new body? Approval of the main directions of domestic and foreign policy, military doctrine, concept of national security; socio-economic development programs. The Assembly has the right to consider the issue of the legitimacy of the elections, make proposals for a referendum, make a decision to remove the President, introduce a state of emergency and martial law, elect, in agreement with the President, the Chairman and judges of the Constitutional Court, the Chairman and judges of the Supreme Court, the Chairman and members of the Election Commission. Also, this body “gives instructions that are binding on state bodies and officials.” In general, a very influential body that can hedge Lukashenka in the event of his resignation. After all, he automatically becomes a delegate to the All-Belarusian People's Assembly, and possibly its Chairman.

The proposed amendments to the Constitution really limit the power of the president, but not Lukashenka himself.