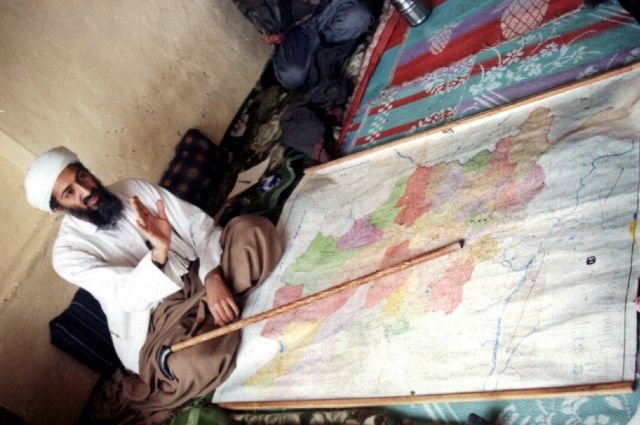 He was one of 56 (!) children of the billionaire Mohammed bin Laden, who was called none other than the “royal builder”. After the death of his father, the guy inherited millions of dollars. Young Osama studied at  Jeddah University, and  according to one information in 1981 he received a diploma, and according another — dropped out of university after his third year and went to  Pakistan.

Under the US umbrella

The media reported that he inherited $250-300 million from his father. One way or another, when the war broke out in Afghanistan, Osama from Pakistan began to support the activities of Islamist groups opposed to the Afghan government at his own expense. In 1988, he founded Al-Qaeda — ultra-radical international terrorist organization (banned in the Russian Federation). After the withdrawal of Soviet troops from Afghanistan, this organization directed all its efforts to the fight against the United States and other countries of the West.

When the contingent of the US army was introduced into Saudi Arabia and American military bases were created, bin Laden accused the authorities of betrayal. In response, the government of Saudi Arabia expelled bin Laden from the kingdom in 1991, and he moved to Sudan.

Some politicians and researchers believe that the CIA had links with Osama, especially at the time when he helped the Mujahideen in the fight against the Soviet troops in Afghanistan. So, British Foreign Secretary from 1997 to 2001 Robin Cookwrote: “Bin Laden was the result of a monstrous miscalculation by Western intelligence agencies. Throughout the 1980s, it armed the CIA and was funded by the Saudis to wage war against the Russian occupation of Afghanistan. In turn, American officials claimed that they supported only native Afghans and denied any connection with bin Laden.

While in Sudan, Osama set up a militant training base in Khartoum. In addition, he invested heavily in road construction and charity, and became a very popular personality in the country. In the end, the Sudanese authorities also expelled the leader of al-Qaeda from the country, and in the spring of 1996 he went to Afghanistan. Moreover, according to the official biography of Osama bin Laden, he personally participated in combat clashes. However, there are reasons to consider him not so much as the main terrorist militant, but as one of their main financiers.

In  August 1996, Al-Qaeda proclaimed that the destruction of the Americans — sacred duty of Muslims. People started talking about al-Qaeda and bin Laden after the terrorist attacks that occurred on August 7, 1998 near the buildings of the American embassies in Nairobi (Kenya) and in Dar es Salaam (Tanzania). It happened on the eighth anniversary of the deployment of US troops in Saudi Arabia. The attacks attracted attention on an unprecedented scale: more than 250 people were killed and more than 5,000 people were injured. A previously unknown organization, the Islamic Army for the Liberation of Holy Sites, claimed responsibility for the atrocity, but the United States considers al-Qaeda's involvement in these crimes proven.

A little earlier, on June 15, 1996, bin Laden's militants organized an explosion of a residential complex in Saudi Arabia, where American pilots were stationed. 19 people died, more than 350 were injured. The most high-profile terrorist attack occurred in the USA on September 11, 2001. Then a group of 19 terrorists hijacked 4 American passenger planes. Two of them crashed into the towers of the World Trade Center in New York, after which the skyscrapers caught fire and collapsed. The third plane that rammed the Pentagon caused serious damage to the left wing of the military building. The crew of the fourth airliner tried to take control of the aircraft from the terrorists, and the aircraft crashed into open fields.

As a result of the terrorist attack on September 11, almost 5,000 people were killed and about 6,300 were injured. The US government demanded that  Afghanistan extradite Osama bin Laden, to which the Taliban put forward a counteroffer — transfer bin Laden for trial in a neutral country. The Americans rejected this idea and, together with NATO allies, launched a large-scale operation to overthrow the Taliban regime. As a result, al-Qaeda's training camps and bases were destroyed, but bin Laden managed to escape to Pakistan.

After the events of September 11, al-Qaeda began to attribute almost all the terrorist attacks committed in the world. By the way, some experts on international terrorism argue that Al-Qaeda is in reality a very small group that simply shares its “brand” with other bandits. Only one — Bin Laden was a terrorist and financed terrorists. It is believed that on May 2, 2011, it was destroyed by American special forces in Pakistan. However, information about the liquidation of the terrorist number 1 was received in the media by that time more than times.

Doubts about bin Laden's death were provoked by the Americans themselves. SWAT did not take Osama alive — he was reportedly shot dead and his body drowned in the ocean. In addition, not a single one of the participants in the storming of bin Laden's house remained alive. They died in  August of the same year. Initial Version — helicopter crash for technical reasons. Then there was the official version of the Pentagon — helicopter shot down by Taliban in Afghanistan. Former Pakistani intelligence chief Hamid Gul stated in a CNN interview in May 2011 that bin Laden had died many years ago and that the May 2 death report was a hoax. Like, there is no visible evidence of the fact of the elimination of Osama.

US President Barack Obama believed that the photos of the dead terrorist No. 1 should not be published, as they would only warm up anti-American moods. By the way, some conspiracy theorists seriously talked about the connection between the leader of the United States and the main terrorist of the planet. They found a portrait resemblance of these people and seriously tried to establish the degree of their kinship.