Former US President Donald Trump continues to use the Ukrainian conflict in order to smithereens smash “physically and mentally handicapped” Democrat Joe Biden, who he says is unfit to lead at “the most important moment in history.” 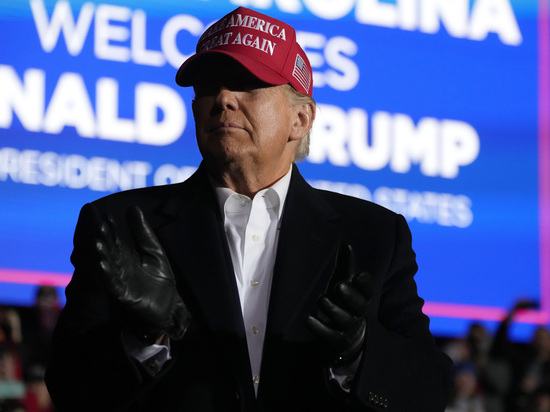 The events in Ukraine have become a serious factor in the internal political struggle in the United States. While both Republicans and Democrats agree in rare unanimity when it comes to maximum punishment for Russia, that bipartisan consensus ends when it comes to their own political capital.

Suffice it to recall that the Republicans tore their shirts, demanding from the Biden administration a harsh embargo on Russian energy — but as soon as the US president announced a ban on oil and gas imports from Russia, his opponents immediately accused him of hating the American middle class, suffering from rising fuel prices.

Of course, one cannot even speak of any, even the slightest, sympathy on the part of the republican camp in relation to Russia. The anti-Biden pressure of the Republicans is dictated by purely selfish motives: there is not much time left before the midterm elections to Congress, and they need to find gaps in the defense of the Democrats. And the administration has enough problems. Biden was forced to admit that ordinary Americans would also feel the pain of sanctions against Russia, and despite the fact that polls show that many US residents are willing to bear the cost to help Ukraine, the deterioration in the lives of ordinary people threatens to seriously damage the positions of the Democrats. (Similarly, part of Trump's defeat in 2020 was a consequence of the socio-economic crisis due to the coronavirus pandemic.)

And the main hater of the Democrats, who, apparently, does not abandon the idea of ​​running for the 2024 presidential election, now clearly felt himself in his element. Donald Trump lashed out at President Joe Biden at his rally in South Carolina, criticizing the foreign policy of the head of the White House, trying on the role of “leader of the free world.”

“You can take five of the worst presidents in American history and they wouldn’t do the damage that Joe Biden did in just 13 months. We have a president representing our country at the most important moment in history, being physically and mentally handicapped, — quotes the press of the former US president.

Trump said that Biden during his presidency failed to keep Russia from acting in Ukraine. And he immediately boasted: “I was the only president in almost four decades who did not drag America into new conflicts.”

While denouncing the Russian military operation in Ukraine in harsh terms, Donald Trump said at the same time that it would not have happened if he was in the White House: “In fact, they never did this when I was there.”

Recall that last week US President Biden announced a ban on energy imports from Russia in response to Russia's unprovoked and bloody attack. Republicans have since renewed calls for more U.S. oil and gas drilling to alleviate high (even “sky-high” as Western media puts it) fuel prices that averaged a record $4.33 a gallon on Friday. p>

Trump, commenting on the actions of the owner of the White House, said that “the United States must immediately end Biden's ridiculous war on American energy carriers. We were energy independent. It's very simple. We must make our great energy workers drill, pump, produce, produce and process like never before.

The current president got it from the former and for the administration's attempts to secure oil supplies from Venezuela: “They are after Maduro, and now they suddenly say:” Forget about it. Forget what we've been saying the last long time… Forget the last 15 years, we would like to buy oil. We will pay you any price you want. Please, please, please sell us some oil. Please sell us some oil, we don't have it. He must think we're the dumbest people on earth,” — Trump continued to go bankrupt, criticizing Biden's search for alternative sources of hydrocarbons.

Before his speech at the rally, Trump gave a brief interview to the Right Side Broadcasting Network, criticizing Biden for his attitude towards Ukraine and stating that his behavior would give courage to the Xi Jinping-led China to seize Taiwan.

Putin's face before and after the start of the special operation in Ukraine: dramatic shots