The Speaker of the Duma urged the deputies of the LNR parliament to work on the harmonization of legislation, legal regulation of healthcare, education and social protection. He thanked the locals for their “love for their native Russia” 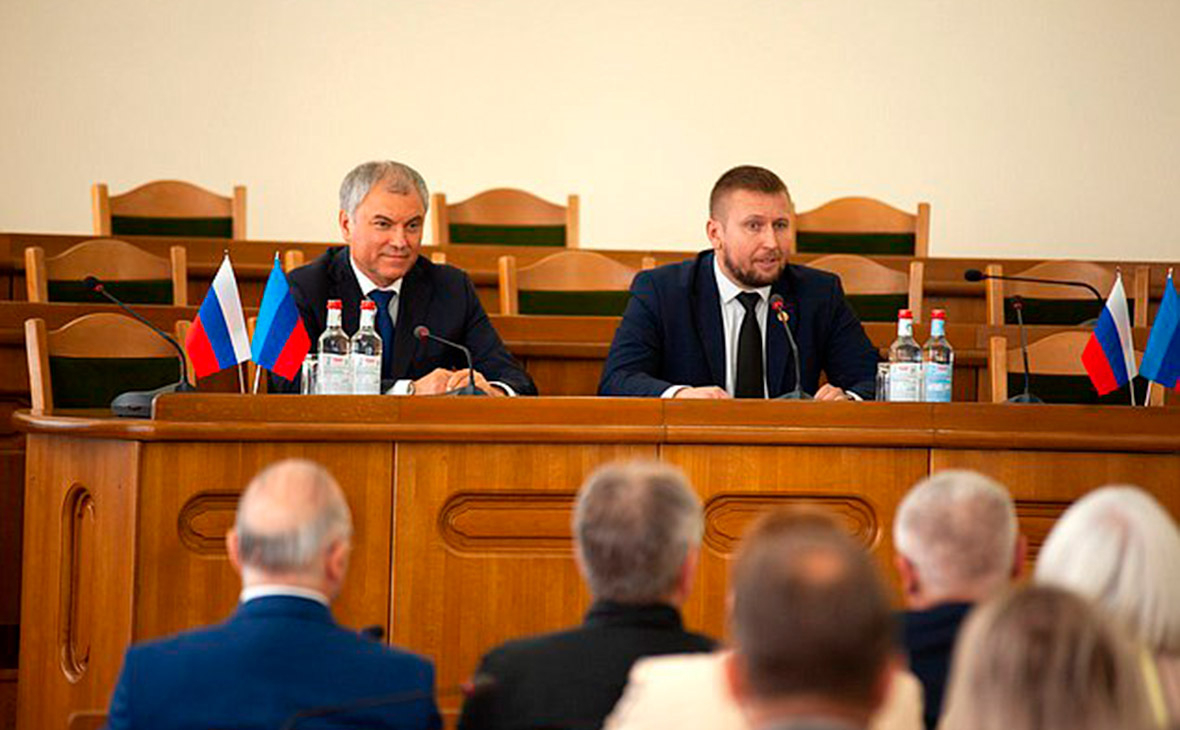 Vyacheslav Volodin, Chairman of the State Duma, arrived on a working visit to the Lugansk People's Republic (LPR), the press service of the lower house of parliament reports.

Volodin addressed the deputies of the People's Council of the Republic and conveyed to them the greetings from Russian President Vladimir Putin.

“We have been waiting for this meeting for more than 30 years. Now the issue of harmonizing legislation and creating a unified legal framework in the areas of healthcare, education, utilities, social protection of citizens is important for us, — Volodin said.

The speaker called on the deputies to work with voters and “discuss the issues that concern them and solve their problems.”

Volodin thanked the citizens of the republic for the fact that “they never betrayed themselves, their faith, language and culture, for keeping the memory of their ancestors and love for their native Russia.”

The speaker of the lower house also met with Denis Miroshnichenko, head of the People's Assembly of the LPR, and discussed with him the transition to “meaningful work.” According to Volodin, the parliaments of the two states should “formulate and solve specific tasks”; and relevant committees have already started working on it.

Read on RBC Pro Pro “I’ll write to the president”: where to complain if your labor rights have been violated Instructions Pro How China’s technology sector lost $ 2 trillion in capitalization Articles Pro How to bargain with the Chinese — the secrets of negotiations Articles Pro Telomere effect. A revolutionary approach to a younger, healthier and longer life Summary Pro They don't know you here: how companies can build a reputation in a new country Instructions Pro Russia has new cybersecurity requirements for companies. How To Do Them Pro Instructions Should Eggs, Vegetables And Fruits Be Washed Before Putting Them In The Refrigerator Pro Instructions The US market is falling. It's time to “buy the bottom” or it's ahead – expert opinions Forecasts

Also, Volodin managed to meet with the head of the Luhansk People's Republic Leonid Pasechnik, the press service did not disclose the details of the meeting.

Before Volodin, Donbass and passed under the control of Russia the territory was visited by the Secretary of the General Council of “United Russia” Andrey Turchak and First Deputy Head of the Presidential Administration Sergei Kiriyenko, who became the curator of relations with the DPR and LPR.

Earlier, on July 6, Volodin suggested that deputies of the State Duma go on vacation to the DPR and LPR and start helping local residents and solution to their problems. On this day, the spring session of the lower house ended, but the deputies decided to hold an extraordinary meeting on July 15. It will consider 17 bills, including those on the federal budget, taxes and fees, protection of the state borders of Russia, war and peace, the speaker said.